Optimistic for the Future: Rhonda’s Story 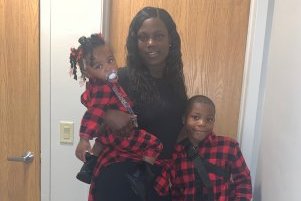 A turn of events left Rhonda and her children homeless with an eviction on their record that made it difficult to find new housing in Madison’s tight housing market.

Rhonda and her two young children (ages 5 and not quite 1 at the time) became homeless in April of 2019. They had been evicted because of a delay in an insurance payment for damage caused by a delivery service backing into their home. The eviction on their record made it difficult to secure another place to live. For the next several months, they slept wherever they could—usually with friends and family.

In August of that year, Rhonda and her children got into The Road Home’s Rapid Rehousing program and Rhonda began working with Josh, her case manager from The Road Home. Having spent several months homeless, the family lacked even basic necessities. Rhonda was also unemployed. As Josh began building a relationship with Rhonda, he could feel her determination to build a better life for her kids. Josh brought her some basic items such as cleaning supplies and gas cards, wish list items generously donated by the community, to help the family get settled in their new home. He also brought books donated by the Madison Reading Project which Rhonda immediately put to use, reading to her young daughter and helping her five-year-old son learn to read himself.

With secure housing and basic needs accounted for, Rhonda was able to focus on establishing stability for her family. She soon had a full-time job. Finding appropriate childcare that covered the times she needed was challenging but she was eventually able to get something in place. The disruption of homelessness had also impacted her school-aged son. Rhonda worked with the school to solve behavioral problems and help him establish a positive routine. Josh continued to support and encourage her as she worked toward her goals. While challenges have continued to arise, Rhonda now feels optimistic about her family’s future.